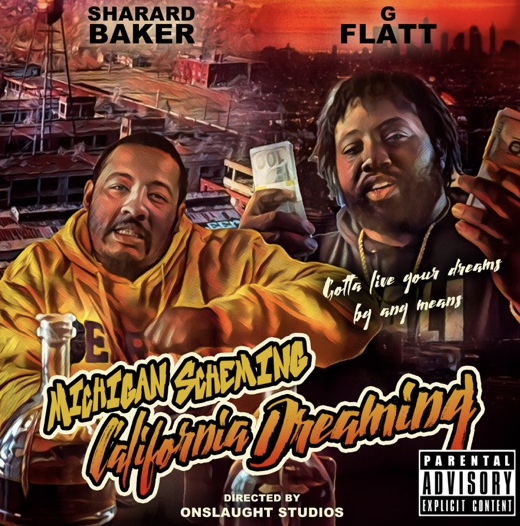 Introducing the highly talented, up-and-coming artists by the names of G Flatt and Sharard Baker. These two make up the group called, Corrupted Society. The two were born and raised in Flint, Michigan, and currently live in Southern California. The two have been creating music together for a very long time. Ever since they were kids they would freestyle at their parent’s houses, practicing and perfecting their craft. After being apart for several years they linked back up and have been inseparable for the last four years together. They both aspire to be making a living creating music as well as traveling the world touring in different places and positively affecting the lives of all their fans.

Sharard Baker and G Flatt write and produce their music. They are just getting started, however with their work ethic and the talent they have, they might just be the next big thing. Sharard currently has three albums, one mixtape, and a few singles. His favorite so far has been his album called “Baker’s Dozen”. It was a collaboration with other artists giving it a different sound. As for G Flatt, this upcoming project will be his first but he has featured on a few of Sharard’s songs in the past. They describe their sound as the 90s meets new-century swagger. It’s got all the throwback vibes mixed with some new school that everyone will love. They mentioned they make music that can be gritty and hard for the streets, similar to their upbringing and past. Their sound music makes you feel good while hitting the spectrum of hip-hop. Currently, the two are working on their next project, “Michigan Scheming California Dreaming” which will serve as a 6 part of the mini movie accompanied by music videos to tell the stories of two brothers leaving their former lives in the past to chase theory dreams and reach their goals as musicians. The single “Michigan Scheming California Dreaming”, was released on September 30th on music streaming platforms. Both artists are inspired by other talented musicians out there including Tupac, Eminem, E-40, Kendrick, Cole, Kanye, and many many more. They are heavily inspired by people around them who encourage them to be better. As for the next upcoming year, they hope to get the traction and attention their new project “Michigan Scheming California Dreaming” deserves.

Having both dealt with hardship in life and mental struggles throughout their life, they have persevered and never given up. Self-doubt and thinking you are not good enough have been a constant battle, but remembering to believe in yourself is the most important thing. Their advice to people entering the music industry would be that it is going to be a lot of hard work and sacrifice, but never give up. Always do your research and fact-check everything!

Outside of music G Flatt hopes to be able to give back to his community back home in Flint Michigan by cleaning up the hood, rebuilding homes, and providing jobs. His biggest support system comes from his children and the motivation to provide a great life for them. Baker mentions his biggest motivation is his family. He wants all of the people who truly believed in him to see all the success he’s been working on and who he is truly becoming.

The most enjoyable parts of being an artist have been making music that is good for the soul and for people to connect with. They love collaborating and networking with other artists in their industry as well as watching their creations come to life. Corrupted Society wants people to listen to their music being they take you on a journey. They mention they are not just one type of rap artist, they can be relatable to a wide range of music lovers. They want their fans to remember the dates October 28th, November 18th, December 16th, January 20th, and February 24th. Keep an eye out for these dates for future projects.

Corrupted Society wants to leave readers with the message to “be consistent, ignore the noise and be positive”. No dream is too big, always keep pushing for greatness. Stay tuned for much much more to come.