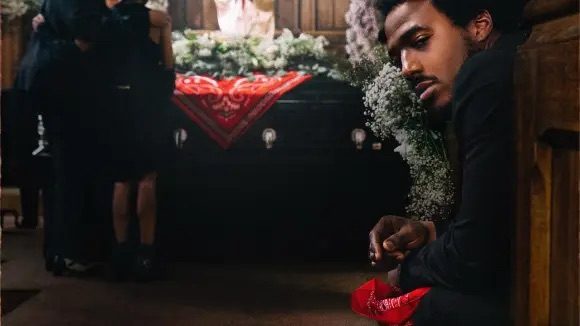 Mozzy recently released his 7th studio album entitled Survivors Guilt. This album follows last year’s Untreated Trauma. The album’s art cover shows the rapper attending a funeral. Survivors Guilt is Mozzy’s first project under the label CMG created by Yo Gotti. Mozzy joins many other talented and young artists being a part of CMG. Yo Gotti, Blac Youngsta, 42Dugg, and EST Gee are all featured on the album.

The album includes “Tell the Truth,” “Lurkin,” “Open Arms,” and “In My Face” which were all previously released singles. This album is very personal as it touches on the trauma he’s endured in life. Mozzy is dealing with things that are out of his control. Every song on the album is a vulnerable flood of emotions. The Sacramento artist has proved for years that he is worthy and continues to improve with time.

In honor of the release, Mozzy has partnered with Homme + Femme to design a collection of clothes inspired by the album. Survivors Guilt is now available on all music streaming services. Be sure to check it out below!